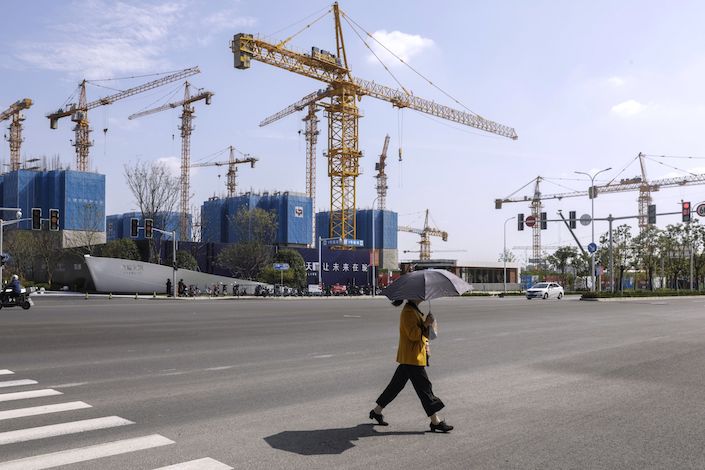 China has not abandoned GDP growth targets even though the government is not proposing to set a numerical growth goal in the five-year plan for 2021-25, a senior official from the country’s top economic planning agency said Monday.

By omitting a numerical target, the authorities will have more flexibility to deal with new uncertainties and developments and will be able to set goals based on each year’s specific situation and conditions, Hu Zucai, deputy head of the National Development and Reform Commission, said at a briefing (link in Chinese).

Scrapping a numerical target in the five-year plan doesn’t mean the government doesn’t want GDP growth, Hu said. There are other quantified targets –– indicators like unemployment and carbon emissions that carry implications for the overall economic growth rate. The aim is to keep average annual growth in a “reasonable range” and to set a goal each year that is appropriate for the country’s economic situation at the time, he said, citing the draft outline of the plan.

As China’s top leadership convenes the annual “Two Sessions” political meetings this week in Beijing, environmental matters are high on the agenda.

While a specific roadmap toward carbon neutrality remains some way off, China’s rulers have used the Two Sessions to bang the drum for a more environmentally conscious development model, one that squares with Xi’s vision of “ecological civilization.”

The Chinese yuan erased all its gains against the dollar this year, the latest to fall prey to the Treasury-led global market selloff.

The onshore yuan weakened as much as 0.5%, falling past the 6.5283 per dollar level it closed at last year. At its January peak, it was up 1.6% from 2020 as the economy rebounded and investors poured money into the Chinese bond market.

Optimism over a global recovery from the pandemic has morphed into concerns that central banks will withdraw stimulus more quickly than expected, leading to higher bond yields. This latest bout of market selling was spurred by the U.S. stimulus package and better Chinese exports data.

The electronic document takes the form of a mini-program in Tencent Holdings Ltd.’s ubiquitous WeChat app, displaying individuals’ Covid-19 test results and vaccination status, as well as the type of shot they received. It includes an encrypted QR code that can be scanned for verification in participating countries, Chinese officials said. It can also be printed.

China’s post-Lunar New Year box office slump was stronger in 2021 than in previous years, but those who’ve stuck around have helped propel a time-travel comedy about a mother-daughter relationship to become one of the best-performing movies in the country’s history.

In the first week after the weeklong holiday that ended on Feb. 21, cinemas saw box office takings slump nearly 70% from the previous seven days, followed by a 59% drop the next week to 696.2 million yuan, ($106.8 million) according to data from the film administration. That compares with 5.57 billion yuan in the peak week.

That drop-off was far faster than in 2019. “Hi, Mom” (你好,李焕英), the top film during the holiday, overtook animated fantasy “Nezha” to become the second-highest earning flick ever on the Chinese market, with sales of 5.1 billion yuan. The 2017 patriotic action smash hit “Wolf Warrior 2” is still in first place with its record 5.68 billion yuan.

Prospects for China’s biggest mainland-listed property developers could be looking up this year after a dismal 2020, when they fell out of favor with investors spooked by an increasingly hostile regulatory environment.

Real estate companies got left behind in the stocks rally that gathered steam in the second half of last year when optimism grew that China’s economy would recover strongly from the impact of the Covid-19 pandemic. The market worried about the intensified crackdown on homebuyers aimed at preventing a bubble in housing prices and about tougher controls on developers’ debts and their ability to raise fresh funding.

But sentiment has turned since the beginning of the year, and some analysts are expecting a better performance in 2021.

Under the aggressive plan, the Yinchuan-based chemical products specialist will shell out an estimated 67.3 billion yuan ($10.3 billion) to build a coal-to-olefin complex in the neighboring coal hub of Inner Mongolia with annual capacity of 4 million tons of olefin, according to a Monday filing to the Shanghai Stock Exchange.

That addition would equal more than a third of China’s current total capacity for the chemical, which is a key ingredient for plastics packaging and medical goods.

China’s power-hungry electrolytic aluminum industry is moving closer to carbon neutrality through a combination of greater recycling and relocating capacity to areas with higher use of renewable energy, a top industry official said.

While limiting production and capacity are important steps to controlling emissions, the industry is also taking other steps to tackle the problem, said Ge Honglin, Communist Party secretary of the China Non-Ferrous Metals Industry Association and a member of the Chinese People’s Political Consultative Conference, the nation’s highest political consultative body, which was meeting this week in Beijing.