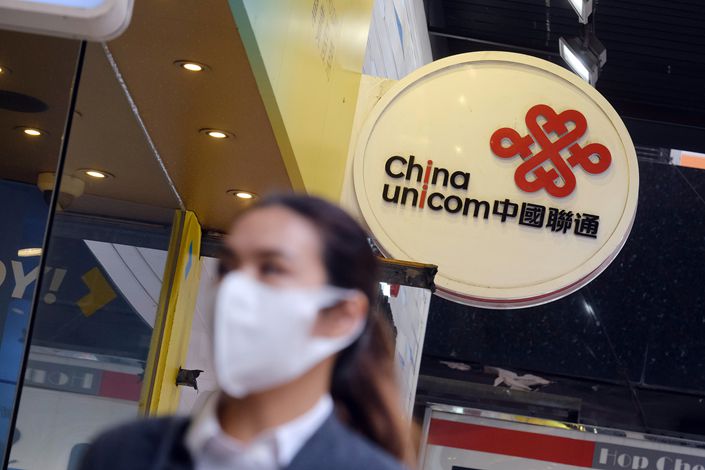 The U.S. telecom regulator said it began a process that could strip the local business licenses from two Chinese entities, including major wireless carrier China Unicom, marking the latest in its flurry of similar moves over national security concerns.

The Federal Communications Commission (FCC) said it was taking similar action against Pacific Networks and that company’s wholly owned ComNet subsidiary after determining that pair and Unicom were all “indirectly and ultimately owned and controlled by” the Chinese government. State ownership in sensitive sectors like telecom services is common in China, with domestic private companies and foreign businesses often largely shut out of such spaces.

According to two identically worded statements released Wednesday, the FCC said it raised concerns with Unicom, Pacific Networks and ComNet that their government affiliation could make them prone to the “exploitation, influence and control of the Chinese government.” Accordingly, it asked them to show why the commission should not revoke their licenses to operate in the U.S.

China won’t back down on ‘core interests,’ ambassador warns U.S.

Cui Tiankai, China’s ambassador to the U.S., told Washington to “give up illusions” of China compromising on any issues in the country’s “core interests,” including Hong Kong, Xinjiang and Taiwan, according to an interview transcript released Thursday by the Chinese Embassy in Washington.

China selected 10 domestic conglomerates and multinational corporations in Beijing and the southern city of Shenzhen to participate in a trial program that allows them to more freely covert yuan funds into foreign currencies.

Under the trial, the multinational enterprises are allowed to manage their use of foreign currencies and renminbi in one single cross-border cash pool and buy foreign currencies at will within certain limits for overseas payments, according to a statement by the People’s Bank of China (PBOC) and the State Administration of Foreign Exchange (SAFE).

The pilot program is part of China’s push to internationalize the yuan. Currently, multinationals operating in China need to keep a separate local currency cash pool supervised by the PBOC and a foreign currency pool supervised by SAFE. They need to seek SAFE approval every time they want to buy foreign currency under the capital account, several regulators and bankers told Caixin. Such controls deny businesses the freedom to buy and sell foreign exchange at will to hedge against currency fluctuations.

The ban strikes another blow against online microlending platforms, including Ant Group Co. Ltd.’s Huabei and Jiebei. A series of rules since November imposed more restrictions on the previously lightly regulated sector and led to the abrupt suspension of Ant’s $35 billion initial public offering.

In a notice jointly issued Wednesday by five government agencies including the China Banking and Insurance Regulatory Commission, the People’s Bank of China and the Ministry of Public Security, the regulators said some micro lenders have targeted college campuses and conducted marketing with the cooperation of technology companies. The campaigns induced some college students into excessive consumption on internet platforms and drew some of them into debt traps.

Local police in the North China city of Cangzhou said they’ve arrested 13 people accused of carrying out telecom fraud worth more than 8 million yuan ($1.2 million) and laundering their ill-gotten gains through a cryptocurrency trading platform.

The use of cryptocurrencies to launder money has increasingly become a problem for police and financial regulators, with cities across the country recently reporting cases involving the practice.

China should create a new law to better coordinate policies to maintain financial stability and prevent risks, a senior central bank official proposed to the national parliament earlier this month.

The suggested new law should make it clear that the Financial Stability Development Committee is in charge of planning and organizing work related to risk prevention, Liu Guiping, deputy governor of the People’s Bank of China (PBOC), said in an article published Tuesday by China Finance, a magazine run by the PBOC.

The proposal comes as policymakers look to shift their focus back to controlling risks and and debt in the economy, which is set to rebound this year.

Colin Huang Zheng, the billionaire founder and chairman of Pinduoduo Inc., stepped down from the company’s board as the five-year-old startup overtook Alibaba Group Holding Ltd. to become China’s largest e-commerce business based on number of users.

Huang, 41, said in an open letter to shareholders Wednesday that his resignation was approved by the company’s board. Huang will be succeeded as chairman by Chen Lei, who is also Pinduoduo’s chief executive officer.

Huang, who handed over the CEO title to Chen in July, said he will give up the 1:10 super voting rights attached to his Pinduoduo shares as he relinquishes executive roles. He said he would entrust the voting rights to the board.

To keep that promise, Chinese authorities have begun to take action. A meeting Monday of the Central Financial and Economic Affairs Commission chaired by Xi reiterated the need to reduce greenhouse-gas carbon emissions. At the annual “Two Sessions” political gathering earlier this month, the National People’s Congress approved a key policy document including climate policies for the next decade and beyond. Here are some key facts about China’s carbon reduction plans.

Japanese carmakers close in on German rivals in China

While German carmakers’ strong China sales helped offset the steep downturn in markets hit harder by the pandemic, their position as the country’s top foreign brands is increasingly being challenged by their Japanese rivals, according to a Chinese car industry group.

China contributed more than 30% of last year’s individual car sales for Volkswagen AG and BMW AG, while Daimler AG sold 36% of its luxury Mercedes-Benz vehicles in the country, according to the trio’s recently released annual reports. Volkswagen delivered 41% of its vehicles to China, the most of any of the three.

However the German brands, which have been the best-selling foreign names in the world’s largest auto market for years, are seeing Japanese companies such as Toyota Motor Corp. and Honda Motor Co. Ltd. catch up.

The company priced its sale of 95 million shares at HK$252 each, according to a filing Wednesday. That represents a nearly 3% discount from Baidu’s Tuesday closing price in New York of $266.78.