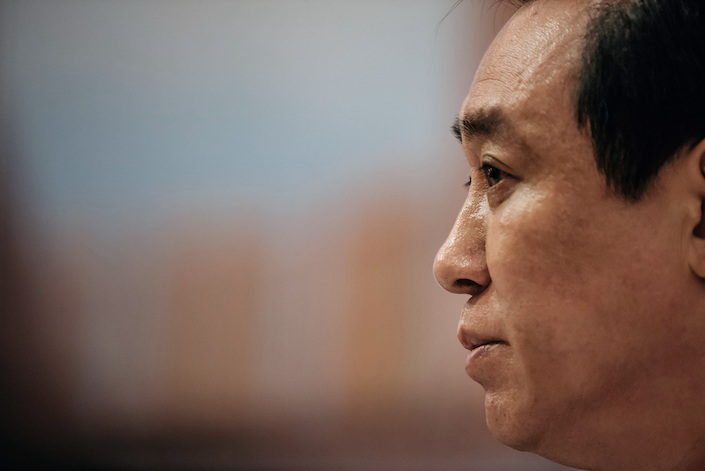 Evergrande, the world’s most indebted developer, has been struggling to sell assets as it grapples with more than $300 billion in liabilities. Chinese authorities have urged Hui to help repay the company’s obligations using his personal wealth. The billionaire has been selling off personal assets including art and calligraphy collections to raise funds, Reuters reported Tuesday, citing a person with knowledge of the matter.

In another step toward the Boeing 737 Max’s return to China’s skies, the aviation regulator expressed satisfaction with the company’s proposed design changes for the model, which was grounded after two fatal crashes occurred within a few months.

The corrective measures to the aircraft’s flight control system software and display system will be able to resolve the safety issues that led to the crashes, according to a notice (link in Chinese) published by the airworthiness certification department of the Civil Aviation Administration (CAA).

Roundup: What to expect from China’s property market in 2022

China’s property sector has been a major driver of the country’s remarkable economic and household wealth growth over the past 20 years, but it appeared to have lost its shine in recent months amid market turmoil such as developer defaults and dipping property sales and prices. This has led to waning confidence among investors and homebuyers.

Although regulators and some local governments have begun offering reassurance to developers, investors and homebuyers, observers are still worried about risks to the macro economy and financial system given the sector’s extensive links to other industries.

Here is a roundup of viewpoints from analysts on how the troubles started, what is the impact and where the market will go.

The diplomat paved the way for former U.S. President Richard Nixon’s landmark trip to China in 1972 which contributed to rapprochement between the two countries. Kissinger made the remarks Wednesday via video link. “We’re through the mountain pass, on a precipice from which you can look in both directions," he said. "And now it depends which direction is chosen.”

Three foreign athletes slated to participate in the 2022 Beijing Winter Olympics tested positive for Covid-19 this month, the organizing committee said Thursday at a press conference.

All three cases were asymptomatic and the three infected athletes have been isolated for medical observation at a designated hospital, Beijing organizing committee officials said.

E-commerce giant Alibaba Group Holding Ltd. agreed to buy a 10% stake in a Shanghai-based state-owned online ride-hailing service, joining the flood of investment into the sector since market leader Didi Global Inc. had 25 apps removed from domestic app stores earlier this year amid a probe into violations of data privacy and security.

Dazhong Transportation Group Co. Ltd. said Alibaba will invest 40 million yuan ($6.27 million) in its ride-hailing subsidiary Letzgo, it said in a filing (link in Chinese) to the Shanghai Stock Exchange Wednesday evening. The deal is subject to regulatory approval and will be scrapped if it fails to get the green light, the company said in a separate filing.

Qingdao-based Hisense intends to participate in bidding for Yunex Traffic, the intelligent traffic system unit of Siemens, though no agreement has been reached, the sources said. Siemens and Hisense didn’t comment.

Chinese streaming giants’ losses grow along with their revenues

In the three months through September, Bilibili’s net loss attributable to shareholders swelled to 2.7 billion yuan ($416.9 million) from 1.1 billion yuan a year ago, even as total revenue grew 61% year-on-year to 5.2 billion yuan, according to its unaudited quarterly earnings report released Wednesday.

Its rival iQiyi’s net loss attributable to shareholders widened to 1.7 billion yuan from 1.2 billion yuan a year ago, despite expanding its total revenue 6% year-on-year to 7.6 billion yuan, according to its unaudited quarterly earnings report, also released Wednesday.

Authorities in Beijing will put a cap on after-school class fees to guarantee more equitable access to school curriculum-based tutoring as part of efforts to flesh out the current overhaul of the private education sector.

The Beijing Municipal Commission of Development and Reform said in a draft document unveiled Tuesday that after-school classes, both online and offline, will be subject to a government pricing guide that sets benchmark and floating fees (link in Chinese), with prices capped at 10% over the benchmark.