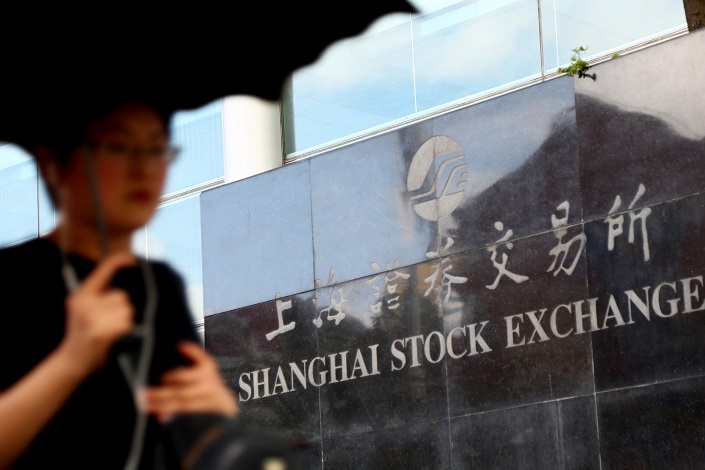 Shanghai Stock Exchange will be the host for country's much-anticipated high-tech board. Photo: VCG

The benchmark Shanghai Composite Index plummeted 4.4% to close at 2,969.86, the largest decline since Oct. 11. The smaller Shenzhen Component Index lost 3.25%.

China’s stock markets have done an about-face since the start of 2019 amid eased Sino-U.S. trade tensions and a slew of policy boosts, and surged well into bull territory. Shares had gained nearly 25% since January before Friday’s dive, spurring worries of a potential bubble.

At a Friday NPC session, a senior official said that delegates will “focus energy” on drafting property tax law this year, in a sign that the wolf may finally be coming for the nation’s 15 trillion yuan ($2.2 trillion) real estate market.

Although there have been some local property-tax pilot programs, China doesn’t have a national property tax for fear that such a tax would hurt the property market, even though it could generate billions of yuan in revenue. Currently, China levies taxes during construction and transfer of properties.

China’s exports slump most in three years on holiday impact

China’s exports declined at the steepest pace in three years in February, with shipments to the U.S. falling the most in almost two decades, hurt by the trade war, cooling global demand, and distortions created by the timing of the Lunar New Year holiday.

Exports of goods dropped 20.7% YOY in February to $135.2 billion, the biggest decline since February 2016, according to Chinese customs data. That compared with a 9.1% increase in January. Imports fell for the third consecutive month, dropping 5.2% YOY in February after a 1.5% slide in January. The steep decline in exports dragged the trade surplus down to $4.1 billion from January’s $39.2 billion and $32.3 billion a year earlier.

China’s trade surplus in goods with the U.S. hit a record high of $419.2 billion in 2018, despite U.S. President Donald Trump’s prediction that tariffs would curb his nation’s imports from China. The surplus was up 11.6% from a previous high of $375.5 billion in 2017, according to U.S. Department of Commerce data.

Russia-to-China ‘Power of Siberia’ pipeline to open in 2019

Russia's “Power of Siberia” eastern-route natural gas pipeline to China will begin operation in 2019, according to Wang Yi, China's Minister of Foreign Affairs, in what is seen as a next step in keeping up with domestic demand for cleaner energy.

The route makes up the eastern portion of Russia’s “Power of Siberia” pipeline, which runs from eastern Siberia to northeastern China. In 2018, the country’s natural gas consumption rose by 16.6% to 276.6 billion cubic meters (9.8 trillion cubic feet).

China’s cuts to taxes and fees are likely to exceed 2 trillion yuan ($298 billion) this year — an amount higher than expected because of the delay effect of previous preferential policies, Finance Minister Liu Kun said Thursday.

Premier Li Keqiang had announced Tuesday in his annual work report that the amount would be “nearly 2 trillion yuan.” However, this estimate is different from the actual amount, Liu said at a press briefing during the country’s annual legislative session.

• Major shareholders are cashing out of China’s bull market

Wang Yi, China’s minister of Foreign Affairs, said Friday that China supports Huawei and its CFO Meng Wanzhou in their efforts to sue the U.S. and Canadian governments, and in “seeking legal redress to protect their own interests and refusing to be victimized like silent lambs.”

Wang said it would be obvious to "any fair and unbiased person" that the recent U.S. actions are "by no means a purely judicial case, but rather a deliberate political case to bring them down."

China’s spending on R&D continues to grow, and funding has shifted away from government sources to business ones, including SOEs, according to one of China’s first comprehensive studies of long-term R&D trends, which tracked the country’s expenditures from the 1990s to 2017.

The sources of funding has been one of the biggest changes in China’s R&D spending since 1995, the report found. Businesses, including state-owned enterprises, provided 70% of R&D investment in 2016, compared with 30% in 1995, when government departments and other organizations accounted for the bulk of funding.

Most overseas Belt and Road projects involve regions where there are significant security risks and are heavily reliant on embassies and consulates to provide security protection, he said. But limited budgets and resources mean such protection is insufficient, he added.

Time’s up for ‘teapots’ in China’s oil refining heartland

Time seems to be up for the smaller, mostly independent oil refiners of China’s eastern Shandong province as the government pushes forward with plans to reduce their number and consolidate them in new, larger refining plants.

Of the 210 million tons of refining capacity in Shandong, around 130 million tons are scattered among “teapot” refiners — so named because of their diminutive appearance. At the Two Sessions this week, the province announced it will cut 25 million tons of teapot capacity in a bid to reduce pollution and rationalize the industry.

Tackling China’s soil pollution may be harder than fighting PM2.5

We don’t usually see it or even think about it, but China’s soil pollution is in fact “very severe,” said Li Wei, director of the State Council’s Development Research Center, during a CPPCC discussion, adding that it could take longer and require even greater investment to solve than air pollution.

Pollution caused by pesticides and fertilizers in China’s soil is among the worst in the world, according to Li. He pointed to Shandong province – a major agricultural hub – where local farmers refused to consume the same ginger they were selling, for fear of toxicity caused by polluted soil. Rampant water and soil pollution could eventually prevent Chinese agricultural products from qualifying for sale on international markets, he said.

• Tesla will borrow up to 3.5 billion yuan from Chinese banks to fund Shanghai plant