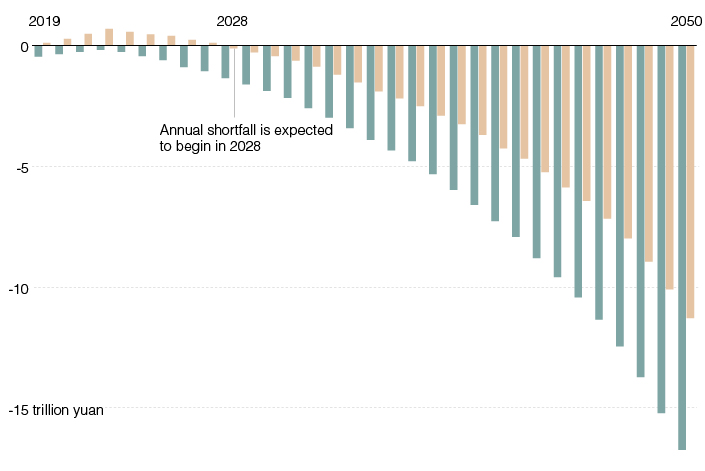 China’s pension system is out of whack

Money that accumulated in China’s pension funds will fall to zero in 2035 after peaking in 2027 at 6.99 trillion yuan ($1.04 trillion), according to a report released by the Chinese Academy of Social Sciences (CASS).

In China, most provincial-level governments fund their own pensions by taxing workers’ wages. Last year the central government created a separate pool of money to redistribute funds from regions with pension surpluses to those with shortfalls, but even with subsidies, the pension system is projected to begin running an annual deficit in 2028.

China “regrets” that the WTO ruled against China in its dispute with the U.S. over grain import restrictions, the Ministry of Commerce said in a statement Friday. The international trade organization a day earlier found that China’s administration of tariff rate quotas isn’t consistent with its obligations to act fairly, predictably and transparently.

“China has always respected the WTO’s rules,” the ministry said, adding that the country will “properly handle (the issue) according to the WTO’s dispute settlement procedures and actively maintain the stability of the multilateral trading system.”

President Xi Jinping will give the opening speech at the forum, and 37 top overseas government officials have confirmed their attendance, Wang said.

The debt crisis at laminating film manufacturer Kangde Xin Composite Material Group deepened Friday after its overseas subsidiary failed to honor a March commitment to pay $9 million of interest on a U.S. dollar bond traded in Hong Kong. Creditors who are owed more than 1 billion yuan ($149 million) are lining up to sue the company to recover their money.

Kangde Xin, based in eastern China’s Jiangsu province, said the unit couldn’t raise sufficient funds to make the payment, putting it formally in breach of contract, according to a statement filed with the Shenzhen Stock Exchange. The three-year, $300 million bond matures in March 2020, but interest is paid every six months.

Dagong Global Credit Rating Co. Ltd., a Chinese credit rating agency that has been banned from rating debt since August, has brought in a new strategic investor to help it reorganize.

After the investment, state-controlled China Reform Holdings Corp. Ltd. will hold 58% of Dagong, turning it from a privately owned company into a state-owned enterprise. China Reform Holdings will take over the restructuring of the credit rating company, the two companies said Thursday in a statement.

The government of Guangzhou plans to set up a 20 billion yuan ($3 billion) bailout fund to help beleaguered publicly listed private enterprises mired in the country’s pledged-share crisis, becoming the latest local government to do so.

Local Chinese governments and financial institutions have set up rescue funds since October at the urging of the central government as part of a campaign to help stabilize the stock market. As of the end of November, local governments had rolled out special bailout funds totaling 170 billion yuan. In addition, financial institutions including brokerage firms, insurers and asset management companies launched bailout funds and bonds worth about 120 billion yuan.

Nintendo Co. shares jumped after China’s Tencent Holdings Ltd. won approval to distribute one of the company’s games for its Switch console, a sign the Japanese company may benefit from growth in the world’s largest games market.

Tencent received approval for the test version of “New Super Mario Bros. U Deluxe” for the device, according to a notice on the website of China’s Guangdong provincial culture and tourism department. A Nintendo spokesman confirmed that Tencent has also applied for the sale of Switch hardware, without elaborating. Nintendo’s stock surged as much as 15%, the most on an intraday basis since September 2016.

The subsidies would apply to purchases of certain home appliances when certain energy-consumption, environmental and technology criteria are met. Discounts for a single item would be as much as 13% of a product’s price tag but no more than 800 yuan ($120) per item, according to a document we reviewed.

Pork chops, chorizo and bratwurst could be more expensive in coming months as pork prices soar because of a virus that’s ravaging China’s hog industry.

Meat processors around the world are selling more pork to China to make up for shortages caused by an outbreak of African swine fever. The consequence is tighter supplies in the U.S. and Europe, which is pushing up prices. The trend is likely to continue as the disease quickly spreads throughout China, the world’s largest producer and consumer of pork.

‘Avengers: Endgame’ has made 400 million yuan in China – and it’s not even out yet