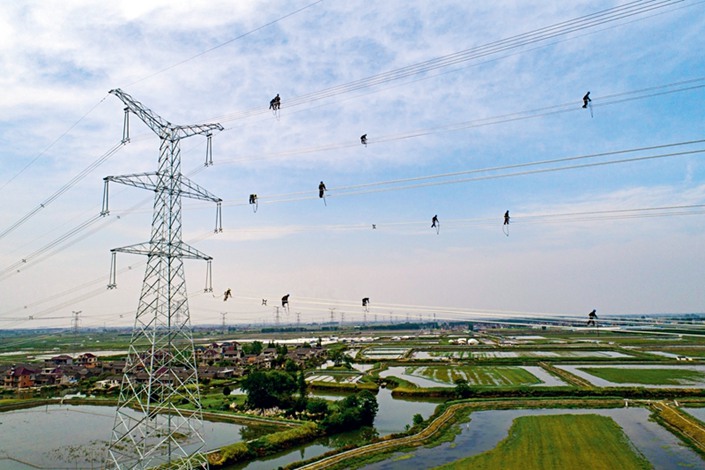 State Grid Corp., the larger piece of China’s power transmission duopoly and the world’s biggest utility, is expected to spin off all of its equipment manufacturing operations by the end of 2021, according to a timetable unveiled by the National Development and Reform Commission (NDRC), China’s top economic planner.

Over the next five years, China plans to invest substantially more in research on basic technology. The March 5 draft of China’s 14th Five-Year Plan outlines a drive for self-reliance in science and technology.

The word “innovation” occurs frequently in China’s five-year plan for the second time. In the draft of the 14th Five-Year Plan, “Insisting on Innovation-Driven Development” was presented as the second chapter, underscoring its importance.

The shortfall highlights the costs of one aspect of China’s Covid-19 relief effort last year as the country’s social insurance system took a financial blow at a time when experts were already worried about its long-term sustainability.

Even taking into account nearly 2.1 trillion yuan ($137.1 billion) in government subsidies, the social insurance funds disclosed a shortfall of 621.9 billion yuan for last year after reporting a surplus of 841.1 billion yuan in 2019, official data show.

Finance Minister Liu Kun said fiscal policy will be “proactive and more sustainable” this year as Beijing plans to slowly phase out stimulus and as the economy recovers from the impact of the domestic coronavirus pandemic.

His remarks came as the finance ministry released its 2021 budget report at the annual sessions of the National People’s Congress (NPC) in Beijing Friday, saying the government is targeting a fiscal deficit for the year of “around 3.2%” of GDP with a deficit projection of about 3.57 trillion yuan ($547.6 billion).

That estimate is lower than “more than 3.6%” last year but slightly higher than analysts’ expectation of around 3%.

Wang told reporters on the sidelines of the country’s annual national political gatherings that other member countries have also stepped up efforts to ratify the deal.

The moves indicate that China may loosen some of its stringent travel restrictions for people who can prove they are either immune to the virus or not infected with it.

China is 30 years away from being a manufacturing powerhouse, minister says

Located in an industrial park outside the city of Wuhan, Hongxin Semiconductor Manufacturing Co. Ltd. (HSMC) was meant to become a $19.8 billion showcase and central plank in China’s plans to create a homegrown microchip industry capable of challenging the West.

Today that same land parcel is mostly quiet, populated only by several idle cranes and three buildings in various stages of construction. One was meant to house the company’s administrative offices, while the other two were meant to produce chips using 14- and 7-nanometer technology, putting them at the cutting edge of the global chip-making industry.

A recent visit to the compound showed the Hongxin name, once a badge of honor, had been removed from nearly all buildings and other structures inside. The name was even covered up on signage at a nearby public bus stop that had incorporated the company’s name.

Zhihu Inc., the Chinese question-and-answer forum often likened to Quora, filed for a U.S. initial public offering, marking one of a dwindling number of Chinese companies seeking such listings in the face of scrutiny by Washington.

The still money-losing Beijing-based company, whose site encourages users to ask and answer questions from other participants, aims to raise $100 million from the listing, according to a prospectus submitted to the U.S. Securities and Exchange Commission Friday.

Zhihu bills itself as the largest Q&A-style platform in China, both in terms of monthly active users (MAU) and revenue. Users totaled 75.7 million at the end of 2020, according to data from research firm China Insights Consultancy.

The logistics arm of e-commerce giant JD.com Inc. will form a joint venture with China’s national rail operator, as the money-losing pair seeks to take advantage of the nation’s state-of-the-art train network that includes tens of thousands of kilometers of high-speed rail.

China State Railway Group Co. Ltd., also known as China Railway, will own the majority 55% of the venture, while the remainder will be held by the money-losing JD Logistics, the pair announced Friday. JD Logistics filed last month to make an IPO in Hong Kong, which would make it JD.com’s third publicly-traded unit, despite bleeding money since it began operating 13 years ago.

A commercial airline captain and head flight attendant who scuffled in mid-air have been suspended from work, Donghai Airlines said in a statement, after news of the fight circulated on an aviation-focused WeChat account Sunday.

The fight broke out after a passenger was spotted in the corridor outside a bathroom used by the cabin staff, potentially jeopardizing flight safety, people in the industry told Caixin. The captain blamed the head flight attendant for not clearing his way to the bathroom and accused him of neglecting his duties.

The incident happened 50 minutes before the Donghai Airlines flight from the eastern city of Nantong, Jiangsu province landed in the northwestern city of Xianyang in Shaanxi province.